Lets face it we are all a little bit fascinated by stone circles aren't we?! Most people immediately think of Stone Henge, but did you know there are over 20 stone circles, cairns and henges in Derbyshire, not to mention hill forts, burial chambers and barrows! Derbyshire is littered with the remains of past lives, civilisations and cultures, many of which remain a source of mystery and legend. Here is our top 6 stone circles for you to hunt down…

One of the most historically significant monuments in the North and the most important prehistoric site in the East Midlands. You can find this Neolithic Henge high up on the wild Middleton Moor, yet not far from the village of Parsley Hay and the High Peak Trail.

Arbor Low is huge, set within an earthen bank and ditch, a circle of some 50 white limestone slabs, all now fallen, surrounds a central stone ‘cove’ – a feature found only in major sacred sites. This 'cove' consisted of at least six stones and those that believe it to have formed a horseshoe shape suggest that the open end would have faced a midsummer moon setting to the south-southwest. Coves are very rare at British prehistoric sites with only three other examples in England - at Stanton Drew, Avebury and Castlerigg. There have been many finds from Arbor Low which has been subject to several excavations over the last 150 years and possibly earlier, these include cremation remains as well as many flint, bone and antler tools and pots.

Parking: There is a small car parking area on the track up to Upper Oldhams Farm.

Access: It is a 300-metre walk from the parking area to the stone circle through fields with gates or stiles, which can be challenging, particularly for wheelchairs or buggies. Be aware that access is through a working farmyard and private landholdings, for which the landowner issues a £1 charge per person.

Facilities: There are no facilities on site. The nearest public toilets and a café are at Parsley Hay, just over a mile away to the west near the A515 junction with The Rake or head over to the Royal Oak at Hurdlow, where you will find great food, local ales and a warm welcome!

Head to Ramsley Moor near the villages of Baslow, Calver and Curbar to find one of the best preserved stone circles in the Peak District.  Barbrook I consists of a circle of 12 stones standing in a hollow on a shelf of raised land and have spectacular views across to the limestone plateau. This is a much smaller stone circle with a nearby cairn in an area that also contains two other circles - Barbrook II and Barbrook III.  This is the southernmost of the circles and contains a flattened ring of twelve or thirteen small stones with only one (to the southwest) over a metre tall. This stone seems to form an entrance with its neighbour but whether this is original or not is unclear - there is a large gap in the stones to northeast too, this could either have been an entrance or just missing stones.
Barbrook I stands on gently southwest sloping land on the west side of Ramsley Moor as it leads down to the stream of Bar Brook - from where the three circles on the moor take their names.

Access: There is a large lay-by on the A621 where you can park and walk over or alternatively head to Curbar Village and use the National Trust Car Park at Curbar Gap. From here you can  head out onto Big Moor.

Sometimes referred to as Six Stones this small stone circle is near the village of Birchover, west of Stanton Moor. Dating from the Bronze Age, the circle consists of six standing stones. The site was excavated in 1852 by Thomas Bateman, and again from 1931 to 1933 by J. P. Heathcote. During this second excavation, three stones were smashed and later repaired with cement. In 1993, unknown visitors rearranged the stones to create a more complete but historically inaccurate circle. It was later restored by English Heritage and Peak District National Park Authority to something close to its original Bronze Age appearance. Doll Tor stone circle is a Scheduled Ancient Monument.

Car Parking & Access: The nearest village to Doll Tor is Birchover where you can park to start your walk.

Facilities & Refreshments: Birchover also has a couple of great pubs for food and refreshments 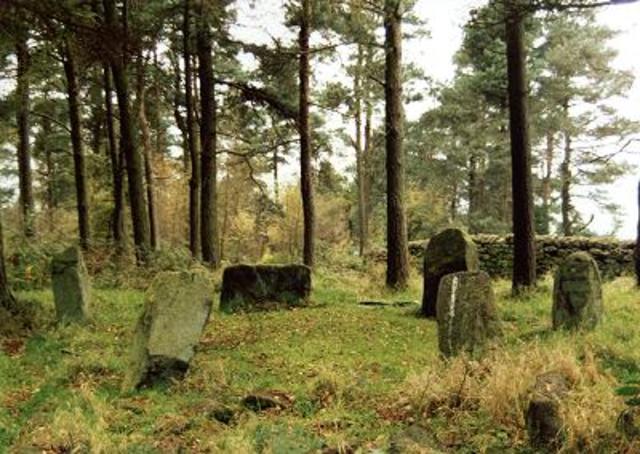 The Seven Stones of Hordron (which sounds like it should be in Middle Earth) can be found in the Hope Valley close to the village of Bamford and Ladybower Reservoir. Sitting on the shelf of land known as Moscar Moor with  Stanage Edge to the east, the carved rock of Ladybower Tor to the west and the the stone circle and cairns of Bamford Moor a mile to the south.  Although it is also known as the 'Seven Stones of Hordron' there are in fact 11 stones here plus another three that were discovered below the peat during investigations in 1992 - gaps between the stones would suggest that there were originally several more. Unlike many Derbyshire circles the stones are not set into a bank but instead form a freestanding ring of between 15-16 metres with heights ranging from about half a metre to the largest one metre tall stone to the southwest. This stone (known as the Fairy Stone) could provide an intriguing insight into the Bronze Age builders world view. The top of the stone bears a curious similarity in shape and angle to two distant hills also to the southwest - Win Hill two miles away and Lose Hill, four miles away. This apparent mirroring of distant landscape features by a prominent circle stone is also seen at Wet Withens a few miles to the south where the hill mirrored is Higger Tor (over which the midsummer sun is seen to rise).

Whether these alignments were deliberate or just coincidental there is no dispute that there are some impressive views from Hordron Edge to the southwest across the flooded valleys of the Rivers Derwent and Ashop which now form Ladybower reservoir.

Car Parking: Park up at Cutthroat Bridge Car Park on the A57

Facilities and Refreshments: Public toilets are available at Ladybower Reservoir and head to Bamford or Hathersage for some great pubs, cafe's and restaurants.

The stones are actually part of an embanked stone circle with at least ten stones and are part of a complex of 70 prehistoric stone circles and standing stones on Stanton Moor thought to date back 3000-4000 years ago.  Legend has it that nine ladies were turned to stone for dancing on the Sabbath and that the King Stone was the fiddler! The graffiti carved on the King Stone, which includes the name ‘Bill Stumps’, is also mentioned in The Pickwick Papers by Charles Dickens. Druids and Pagans still visit the site to celebrate  summer solstice.

In common with many other stone circles, little evidence has been uncovered to suggest why or when this stone circle was built and how it was used. Suggestions include a place for ceremony or burial, a territorial marker, a perceived link between the earth and the sky and the living and the dead, or a meeting place for seasonal events. Such monuments may have had many functions, their uses and perceived significance shifting over time.

No longer nine, but four stones remain of this stone circle that is also known as 'the grey ladies'. These are the largest stones in Derbyshire, they stand isolated in a farmers field on Harthill Moor, almost due west of Doll Tor and the ritual complex of Stanton Moor that lies a short distance beyond.

In the middle of the 19th century, the antiquarian Thomas Bateman recorded seven upright stones at the site as well as finds of pottery shards and flints. A little further south is the rock outcrop of Robin Hood's Stride which may have served as a sacred hill alter, as from the centre of the circle the major southern moon is seen to set between the two stone pillars on top of the hill. There are several legends and myths attached to this circle, one claims that the stones dance at midday, another says they dance at midnight. A story recorded in the 19th century tells of a farm labourer who found a clay pipe at the stones, and when he smoked it, was able to see through the surface of the earth near one of the stones to a land inhabited by fairy folk!

Dogs: Dogs on leads are welcome but must be kept under close control as there may be animals grazing